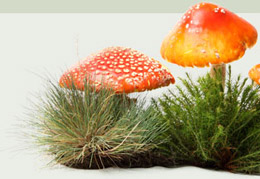 There are three general ways that a plant can poison us:

Just how badly a poisonous plant may effect us can depend on:

The following list includes some of the poisonous plants you may find when hiking or camping in Western North Carolina. It is not intended to be an all-inclusive list of all known toxic plants or all the possible symptoms that can be caused by these plants.

You may have noticed pictures in the news recently of people suffering from horrific, 3rd-degree burns, permanent scaring -- and even blindness -- after encountering Giant Hogweed plants growing along roadsides or in parks, pastures, and even backyards.

It turns out, the wretched plant was introduced in the US over a century ago as an ornamental and for erosion-control (how could those who brought it from Eastern Europe not been aware of its reputation?!). And, probably because birds eat and disperse its seeds, it can now be found in many Eastern US states. What makes Giant Hogweed especially scary is that its appearance closely resembles that of many other, far less noxious and very common plants in the carrot family. Fortunately for us in North Carolina, Giant Hogweed has so far been confined to only 6 locations in the Blowing Rock, NC area.

How can I recognize Giant Hogweed? And how concerned should I be?

Some of the most helpful photos and tips for identifying Giant Hogweed come from NY state which, coincidentally, is believed to have the worst infestations.

New York state officials have identified well over 2,000 plots containing Giant Hogweed -- with some of these containing over 1,000 hogweed plants! Fortunately, NY health officials are aware of only reported 4 burn cases over the past 12 years (and 2 of these were state eradication staffers). Apparently, just touching or brushing up against the plant is most likely not problematic. It is only if you cut the plant's tall, thick stalks or crush one of its gigantic leaves and come in contact with the it's sap that it becomes so dangerous. In fact, that's exactly what happened in the case that drew so much attention recently -- of a young Virginia man cutting brush as part of his landscaping job.

Think you may have spotted a growth of Giant Hogweed plant? NC Dept. of Agriculture asks that you notify their Weed Specialist, Dr. Bridget Lassiter at [email protected] or (919) 707-3749.